Author M. C. Ronen (Maya Cohen-Ronen) is a New Zealand based vegan, feminist, and animal rights activist. She wrote The Liberation Trilogy out of disappointment at being unable to find mainstream books that avoid banal mentions of animal cruelty acts and/or everyday speciesism. Her deliberate intention was to create an exciting, fast-paced, page-turning fiction series that has a clear ethical undertone and message with a potential appeal to a wide range of readers.

M.C. Ronen has always been a book junkie. She loves fast-paced, suspenseful thrillers, full of plot-twists and cliff-hangers that made her heart race is her preference.

Upon going vegan she discovered to her surprise and dismay that she could no longer enjoy books as she did before.

Suddenly she could no longer find any reading material – at least, not anything that was ‘safe’. Now, every book she picked up, whether recommended to her by a friend, promoted on mainstream media, a best seller, or randomly picked up in the bookstore – every book there was seemed to ooze with at least one of the following: Speciesism, animal cruelty or even blatant anti-vegan sentiments.

Slowly she found herself reading less and less. The wonderful door to a universe of imaginary worlds was closing. 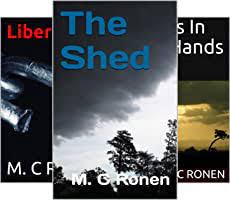 Around 2016 she made a decision – if it didn’t exist, she would write it herself!

This was the catalyst for The Liberation Trilogy being born.

During this episode of the Vegan Visibility Podcast, M.C. Ronen and I dig deep into what led her down the path of writing that she is on. Writing is just one of the many ways she is an animal activist.

[01:45] The Vegan watershed moment that changed everything

[05:20] Losing a child during pregnancy deepens the commitment

[08:00] The truth about what the animals go through when their babies are stripped away from them

M. C. Ronen is an award-winning author based in New Zealand. She is a committed feminist, vegan and animal rights activist.

She was recently named “one of the most globally acclaimed and loved vegan authors in the movement” by the Vegan and Plant Based Living magazine, New Zealand.

She has been a committed vegan since 2012 and an animal rights activist almost as long.

Her journey into veganism was a one-night process. When she realized the horror inflicted on animals by the dairy industry, she stopped eating all sentient beings.

“If it has a mother, I don’t eat it,” Ronen stands strong.

Being the mother of a young baby girl, she could not fathom causing so much pain on another being, a grieving mother, regardless of whether she is human or any type of sentient being.

Going vegan brought about many positive changes in her life including new friends, activism and being more aligned with her values.

Being a staunch feminist, with an MSc degree in Gender and Society (University of Edinburgh), the change she made in her life had also promoted a deeper, more robust and wholesome perspective on what female exploitation means.