One of the most popular dream trips is an African Safari. The type of safari where you drive from one destination point to another while snapping pictures of the extraordinary animals roaming the beautiful landscape.

Yet, there is often a disconnect when one enjoys the awe-inspiring animals while out in the bush only to sit down to a meal with the very animals that inspired admiration earlier in the day.

One doesn’t have to look far to find impala, crocodile, giraffe, zebra, and many other exotic animals on the menu of many restaurants throughout Africa.

This type of trip is more of a nightmare than a dream trip for vegans.

One man who is flying high to change this is long-time pilot, JC De Klerk. Passionate about flying, veganism and introducing others to the mysteries of Africa, JC is on a mission to change the face what it means to experience an African Safari… the Vegan way.

JC De Klerk specializes in memorable safari holidays that are vegan and stress free. This is the very reason he founded Air Safaris. 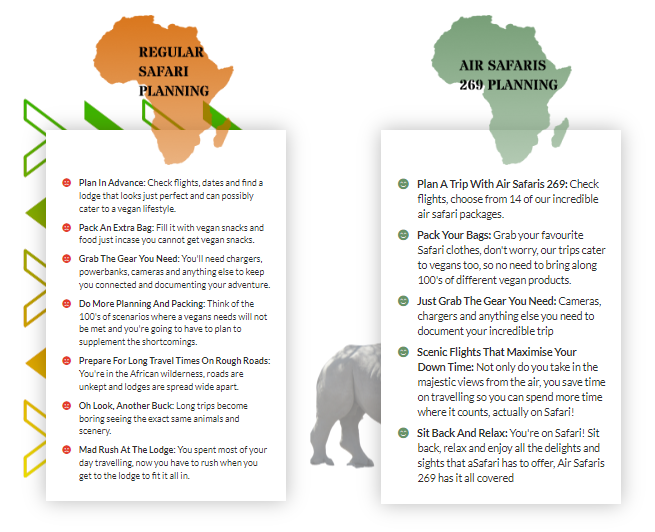 Before founding Air Safaris, JC was a pilot for over 25 years. His mission with his business, and his life is simple; JC is committed to “do no harm” to animals in every way possible.

Customized to what his clients desire, JC is excited with the growth the vegan sector of travel.

“Veganism is still a foreign concept in many parts of Africa. After traveling extensively as a vegan family, we knew that vegan travelers like us are wanting to come on safari but are not sure how to navigate the challenge.” JC says with obvious excitement at what the future holds.

Having grown up on a cattle farm, meat was in his DNA. Originally from Namibia, meat was served at virtually every meal.

JC’s vegan journey began while living in Singapore. At the time, he was flying extensively throughout Southeast Asia and Australia.

It was when his wife was pregnant, over 11 years ago, with their daughter, his eyes were opened to healthier food choices. Together he and his wife started with the idea of being vegetarian.

Initially, their decision was about their health and the health of the newborn. In time, like many vegans who start for out calling themselves plant-based eaters, JC realized the atrocities animals experience and what is happening to the environment. When his daughter was born, both JC and his wife made the decision to go vegan.

His unique safaris are one way he educates and informs others on how to live compassionately, consciously and aligned with vegan values.

Air Safaris is the perfect choice for those who want to experience Africa in a unique way. Rather than spending a lot of travel time driving from location to location, with JC’s unique approach, travelers enjoy more time at each location learning about all the sentient beings they viewed from above.