107: The Mediterranean Plate Takes the Vegan World by Storm

Debbie Adler is a plant-based chef and the author of the newly released book, The Mediterranean Plate. She is the award-winning cookbook author of the critically acclaimed Sweet, Savory & Free: Insanely Delicious Plant-Based Recipes without any of the Top 8 Food Allergens, and Sweet Debbie’s Organic Treats: Allergy-free & Vegan Recipes from the Famous Los Angeles Bakery. 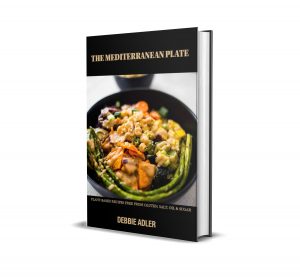 During this episode we dig deep into health, to diet or not to diet, shopping on a budget, family-friendly meals and more.

Debbie is a plant-based cooking and baking instructor and her popular online courses Plant Powerful Life GPS, Quintessential Health 360° and The Complete Plant Powerful Weight Loss System have been taken by hundreds of students worldwide.

Debbie has been featured in the Los Angeles Times and on NPR’s radio show Here and Now. Her recipes have been published in national publications such as Pilates Style Magazine, Naked Food Magazine, Allergic Living, Living Without, Simply Gluten-Free, Delight Gluten-Free, Ventura Blvd, and Low Sugar Living, as well as on popular websites and blogs such as Cosmopolitan, One Green Planet, The Kitchn, Chic Vegan, Austin Food Magazine, and Self.

02:06 From kosher butcher grandpa to full out vegan

17:49 Food staples to increase the ease of cooking

22:00 A Labradoodle changes everything

26:30 Increase your chances of staying healthy

Farm animals are among the most abused creatures on Earth. An estimated 77,047,000,959 land animals were slaughtered worldwide for food in 2018. Many were raised on factory farms, which maximize agribusiness profits at the expense of the animals, the environment, social justice, and public health. Donations welcome. CLICK HERE TO LEARN MORE