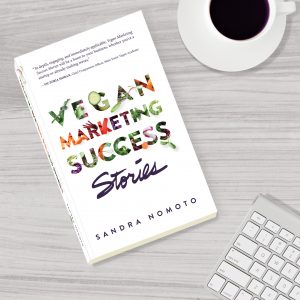 Have you ever had a great idea and yet, you’ve done nothing with it. Right now, lots of vegan authors are likely thinking, “Wow! I knew that would be a great idea, but had no idea how GREAT it would be!” as they read the newly released eBook, Vegan Marketing Success Stories by author, Sandra Nomoto.

Vegan Marketing Success Stories is taking the vegan business world by storm. A first of its kind, Vegan Marketing Success Stories highlights the marketing tactics of many of today’s most successful vegan businesses. With 47 contributors and dozens of other vegan companies mentioned as examples, the non-fiction book shares how on- and off-line tactics contribute to a cohesive strategy and topical issues that few marketing books are talking about: the importance of diversity and inclusion, what vegan businesses did to weather the pandemic, and how some have transitioned to becoming vegan.

“In 2021, I researched whether there was a book about marketing for the vegan industry. When I discovered one didn’t exist, I knew I had to publish it,” says Nomoto, a vegan content writer and editor since 2020 who operates as The Content Doctor. She continues: “This book would not have been possible without the stories of the 47 contributors and other vegan companies around the world.” 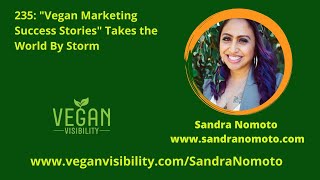 The eBook is available as of September 1, 2022, on Lulu.com’s bookstore. CLICK HERE to get the eBook version today!

The print and audio versions will launch on World Vegan Day, Tuesday, November 1, 2022. Lulu will distribute the book online where books are sold six to eight weeks after each date.

Would you prefer a signed copy? Sandra Nomoto is making signed copies available at www.sandranomoto.com, and at select events. 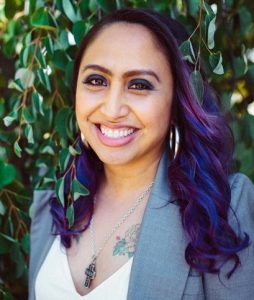 About the Author: At twenty-five, Sandra Nomoto (née Garcia) founded Conscious Public Relations Inc., an award-winning virtual agency that certified as a B Corporation. After a decade in business, she authored and self-published The Only Public Relations Guide You’ll Ever Need in 2019. Living vegan since 2018, Nomoto is now a content writer and editor for vegan businesses who also helps vegan and spiritual non-fiction authors. She aspires to eat vegan food around the world and blog about it, and lives in East Vancouver, Canada with her husband.