Vegan and Plant Based Are Apples to Oranges (sometimes)

Is veganism a diet? Is one who eats plant-based vegan?

Not necessarily. The two don’t always go hand-in-hand. Yet, many people assume both are one and the same.

Truth be told, although there are many food choices vegans make, ranging from healthy, processed, even junk food, one thing all vegans have in common is their commitment to doing no harm to animals.

As a vegan myself, I have often been amazed at how some vegans insist eating plant-based is the only way to go, while other vegans will eat plant based processed foods and yet others will eat highly processed foods like Oreos, unfrosted Pop Tarts, spicey sweet Chili Doritos and more.

The definition of veganism, as defined by The Vegan Society, is: “A way of living which seeks to exclude, as far as is possible and practicable, all forms of exploitation of, and cruelty to, animals for food, clothing or any other purpose.”

The definition of a plant-based according to Wikipedia is: “A plant-based diet is a diet based on foods derived from plants, including vegetables, whole grains, nuts, seeds, legumes and fruits, but with few or no animal products.”

The definition of a plant-based/vegan is one who is vegan and eats as close to whole food, plant-based as possible.

Again, being vegan is about doing as little harm to animals as possible in all areas of one’s life. This means being 100% void of all animal and dairy in as many ways as possible including cosmetics, hair products, clothing, furniture, household products, etc.

Distinction Between Vegan and Plant Based

Being a vegan does not mean you are plant based. However, being whole food, plant-based, void of animal and dairy does mean you don’t eat meat, dairy, poultry or fish which likely means you are vegan.

Someone who is not familiar with what it means to be vegan may assume all vegans eat super healthy. This is not always the case. There is plenty of evidence that you can be vegan and still eat foods that are processed, filled with sugar, salt and oil. Again, refer to this list for plenty of processed vegan foods. https://www.iheart.com/content/2018-01-18-junk-foods-that-are-accidentally-vegan/

On the other hand, whole food, plant-based eaters who subscribe to the no S.O.S. protocol tend to eat very healthy. (S.O.S. Salt, Oil, Sugar) Yet, even if someone is plant-based, they may not be vegan.

To be clear, this post is not about slamming vegans, but rather to show that not all vegans are created equal.

I am vegan, and have been since 2018, and am amazed at the wide array of food choices vegans have. But again, one thing all vegans have in common is to live in a way “which seeks to exclude, as far as is possible and practicable, all forms of exploitation of, and cruelty to, animals for food, clothing or any other purpose.”

Although plenty of vegans eat super healthy by consuming a whole food, plant-based diet, other vegans eat plenty of processed foods that border on junk food.

The Junk Food Vegan states “You can be vegan and still have a very poor diet. Ideally, your diet should consist of mostly whole plant-based foods which include vegetables, legumes & beans, nuts, seeds, fruits, superfoods, healthy fats, grains and fermented foods.

“A junk food vegan is a vegan who regularly consumes highly processed foods which are essentially made in science labs. Some popular choices are the famous Oreo biscuits as well as a variety of vegan cheeses.” Full post https://theminimalistvegan.com/junk-food-vegan/

My Turning Point from Plant Based to Vegan

When I initially eliminated all animal and dairy from my diet, I did NOT identify as vegan.

However, six months into my change of diet, while at the grocery store, walking by the meat department (headed to the bulk section for nuts and seed) I literally stopped in my tracks. In that moment, I could feel the pain and suffering animals go through due to factory-farming, exploitation, forced breeding, abuse, stress, anxiety and ultimately, a brutal death.

It was in this moment I identified as a vegan and have not looked back. If anything, I continue to learn and grow as a vegan. My commitment is to do all I can to do as little harm to animals in all areas of my life. As well, I interview men and women from all walks of life for both my podcast shows.

Be Aware of Your Triggers and the Bliss Point

As someone who has a propensity to foods that are not the healthiest, like sugar laden junk foods, oil based and high in salt, when I initially decided to go plant based, I made a decision to go the No SOS diet. SOS-free diet simply means that no salt, oil or sugar has been added during food preparation, cooking or afterwards.

To be clear, initially I did not identify as a vegan. Why? Because I didn’t fully understand what being vegan meant. But I digress.

Regarding my food, I tend to be a very black and white eater. There are some foods that trigger me to obsess over food. I used to think I was weak or had no will power. Truth be told, we have been conditioned to these triggers by way of the Bliss Point.

“The food industry has processed lots of foods to hit that “bliss point” — that perfect amount of sweetness that would send eaters over the moon. In doing so, it’s added sweetness in plenty of unexpected places – like bread and pasta sauce,” says investigative reporter Michael Moss.

It’s no secret that what we eat either improves, or decreases, our health. One is left wondering how much the Bliss Point has contributed to overeating resulting in excess pounds and obesity. Track the results of obesity and you find a rise in cancers, heart disease, diabetes, high blood pressure, autoimmune diseases and inflammation.

For anyone to deny this fact is due to one of two things. One, they really don’t know. Two, they know there is a correlation, but choose to ignore the facts in order to not make needed changes.

I liken the current health crisis of many people to that of someone drowning. We can pretend there is no problem and watch the person drown, or we can do everything in our power to pull the person to safety. I choose to do what I can to raise awareness in hopes that, in my own small way, I can influence the decisions others are making to assure they live as healthy a life as possible.

I’ve not always been one to subscribe to the healthiest lifestyle. Years ago, I drank to excess which contributed to other unhealthy behaviors like overeating. Many times, I went on crash diets to lose unhealthy weight. Diets that likely were damaging in more ways than one.

Like many people, I wanted a short term, quick fix for a long-term problem. It wasn’t until I stepped back and really evaluated what was going into my body that I realized a more humane way of eating. Humane to me, the animals and the environment.

My journey into a whole food, plant-based eating protocol started for one reason and has evolved into something very different.
I was first introduced to this concept while researching ways to minimize joint inflammation. I came across the works of Dr. Joel Fuhrman – Eat to Live.

According to experts like Dr. Fuhrman, not only is an animal-based diet, as well as added salt, oil and sugar are at the root of many of our health issues including weight gain, obesity, cancer, diabetes, heart attacks and strokes, it prevents us from living fully.

It doesn’t take a rocket scientist to figure out that what we consume has a direct impact on our health.

Within a couple of days of going plant-based, the inflammation was completely gone. In addition, my energy was increasing as was my emotional well-being.

Researching more about this way of life, I realized eliminating the very things I had been led to believe I need in my diet (meat, eggs, poultry, dairy, fish, certain types of oils) was the healthiest thing I could do.

Additionally, I found a plant-based diet to be in complete alignment with my compassion for animals.

Whatever diet one chooses is their choice. Yet, as previously mentioned, one thing all vegans can agree on is we are committed to doing as little harm to animals as humanly possible. This usually starts with what we eat and step-by-step reaches into virtually every area of our life.

Do Your Own Research

Don’t take my word for it. Do your own research. There are countless books, documentaries, YouTube videos and blogs that address this topic. Click any of the recommended documentaries and books.

Regardless of what food choices you make, the number one reason to be vegan is to do as little harm to animals as humanly possible.

To hear from vegan men and women from all walks of life, enjoy the Vegan Visibility podcast show and Plant Based Eating for Health podcast show where I’ve had the distinct pleasure of interviewing Dr. T. Collin Campbell, London Todd, Katrina Fox, Chef AJ, Monk Coleman, Chuck Carroll, and more. 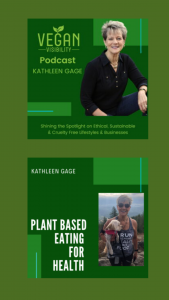