232: One Vegan Hard at Work Rescuing Animals in Vietnam

In many countries, animal rescues and sanctuaries are an accepted part of the culture. Yet, in other countries, they are a rarity.

In Vietnam, a country of over 96 million people, one woman who is doing all she can to raise awareness about the need for animal aid and rescue is Catherine Besch, founder of Vietnam Animal Aid and Rescue – US.

During our lively conversation, Catherine shared what it’s like to run a rescue organization in Vietnam.

Turning vegan nearly a decade ago, Catherine is incredibly passionate about being a voice for the voiceless. With a background that included working with the National Turkey Federation, in a position that was designed to get people to eat more turkey, Catherine shakes her head when she speaks of times past.

“It proves that anyone can change,” Catherine states.

Now a full-time animal rights advocate, Catherine says that many people think sanctuaries are all about kittens happily running around. Nothing could be further from the truth. 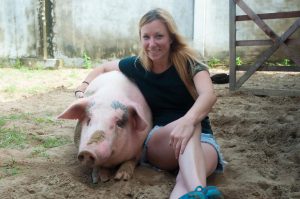 With billions of animals slaughtered every year, simply to satisfy those who choose to consume them, Catherine says there is no end in sight to the abuse.

Having traveled extensively throughout the world to places like Mongolia, South America, Chile and Peru, Catherine chose to put roots down in a country her father had an affinity for.

Her father served in the U.S. Marine Corp during the Vietnam war. He so loved the country, he and Catherine’s mother relocated to Vietnam as newlyweds 50 years ago.

Catherine’s love of Vietnam is many fold. Besides the amazing vegan food, the people, the culture and the landscape, Catherine says she eats like a goddess.

In addition to funding, which was cut drastically when the war in Ukraine began, having convenient veterinary care is a major obstacle to what Catherine does.

Add to this the fact that there are severe restrictions on driving and the wall of challenges gets higher by the day.

Yet, this does not dissuade Catheryn, or her team. With a drive that leaves most people in the dust, Catheryn is quick to point out the number of animals needlessly killed in the country.

According to Catherine, people will cry rivers about the five million dogs and one million cats killed in the country. Yet they ignore the 44 million pigs, 600 million chickens and two million cows killed every year in Vietnam. Add to that the fish farming, and it’s an atrocity.

A Normal Day… Not!

When I asked Catherine to describe a normal day, she pointed out there is no such thing. The only thing normal is the chaos, lack of funding and cleaning up lots of poop. 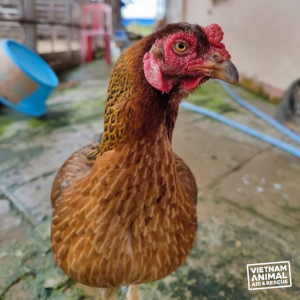 If there is one thing the Vietnam Animal Aid and Rescue – US desperately needs, it’s funding. Any size donation helps. The average donation is a onetime donation of $20. Beyond that, they are pretty much on their own to figure out where the money to feed and care for the animals will come from.

Something that always brightens Catherine’s day is her companion chicken. A 10-year-old beauty, Catherine gushes as she talks about her.

To assure all the animals get the care they need, consider a donation of any size.

To make a donation go to…https://www.vnanimalaid.org/

Catherine Besch is the founder and director of Vietnam Animal Aid, the only vegan farmed animal sanctuary, rescue, and anti-speciesist animal rights organization in Vietnam. Her academic background in International Relations and Emergency and Disaster Management but has been focused on long term solutions to animal suffering through veterinary training projects and vegan education work along with addressing the global food security implications of animal agriculture and fishing in a rapidly warming planet. She is a fierce pig mom, animal rights writer, vegan cheese gourmand, and seaweed farming geek.